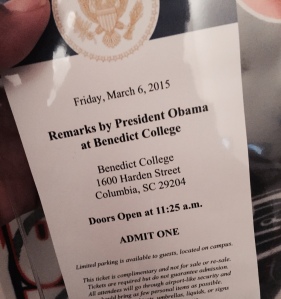 This past Friday, March 6, 2015, The President of the United States, Barack Obama held a Town Hall meeting at Benedict College in Columbia, South Carolina. Benedict College is a historically Black college in the state that he, others and myself know helped propel him to the White House by winning the South Carolina Democratic Primary, on Saturday, January 26, 2008. He not only won it but left his opponents scratching their heads and wondering what happened. Then Senator Barack Obama won the SC Democratic Primary with 55.4% of the vote, with then Senator Hillary Rodham Clinton in a far second with 26.5% and Senator John Edwards an even further third place with 17.6%. Even adding Clinton and Edwards votes together Obama had won.

He admitted to an intimate crowd of 1,100 students, elected officials, and community leaders including myself that he was long overdue for a visit to South Carolina. We all cheered in complete agreement. After short opening remarks President Obama opened up the floor for approximately 45 minutes of questions and answers. With microphone in hand walking around the stage, he took questions. Diplomatically beginning with female, male, female, male to be fair to those in attendance. There were questions that ranged form the environment specifically the Keystone Pipeline veto, to gun violence as well as findings regarding the Ferguson police department.

Then there was the 10-year old boy that stole the show. Trace Adams asked the President, “When did he first think of becoming President.” President Obama responded, “It wasn’t when he was 10 years old.” The President indicated “He was more interested in becoming an Architect and creating buildings.” What I found to be inspiring was after Trace, who was directly behind me sat back down he burst into tears. I can only imagine the impact of the leader of the free world telling him he could be President has done to inspire him. 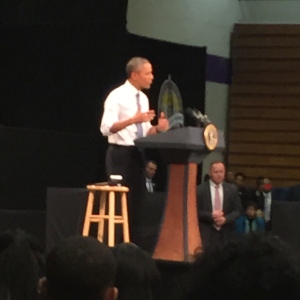 It was on Monday, I learned that President Obama was coming to South Carolina. And I immediately began getting request for tickets to the event. I felt honored that people thought I had such influence and power but at that point I didn’t think I would even be able to attend. The event was focused on speaking to and encouraging young people. However as the week progressed, I was approached with the opportunity to get entrance into the event. To be honest, I hesitated in deciding whether to attend, I thought that it would be a huge crowd. However, I learned it was going to only be select group of people in attendance.

Often I am asked how did I get involved in the various activities in which I participate. I sometimes want to say, I am merely present in my life. I first volunteered to help Obama get elected in the 1996 General Election when he was running for Illinois State Senator. Initially volunteering for President Clinton’s re-election campaign, I had the opportunity to help with what is called down-ticket races. And Obama was the race, for which I provided assistance via phonebooks.

Moving forward to May 2007, when I volunteered for the Obama ’08 campaign the rest is history. I drove in a Secret Service lead motorcade, helped assemble his personal daily briefing books, assisted with the General Election Get Out The Vote (GOTV) campaign, and from 2010 until 2013 served as State Digital Lead. My role as State Digital Lead even lead to opportunities to manage the state digital desk at the Presidential Inaugural Committee HQ in Washington, DC on 2013 National Day of Service.  All of this was done on a volunteer unpaid basis. I did not look for any reward other than to help get Obama elected and then re-elected.

Politics can be brutal and overall I enjoy my career, so I don’t desire pursuing a position in the political arena outside of my volunteer efforts. However, I have had some amazing opportunities along this journey and looking back would be just as active as I have been.  Above the experiences I have gained, valued and honest friendships with people I may never have met otherwise.

Upon first moving to South Carolina, I inquired of my now late grandfather, how he received so many accolades and rewards? He said, “He was just present.” Of course it was more than him being present. He had to actively volunteer for the various organizations in which he was involved. His hard work ethic led to being approached by leadership and propelled him into leadership roles. My grandfather and parents examples of being present in their own lives has helped to propel me forward in life. When you show up not expecting anything in return, the blessings truly do flow.