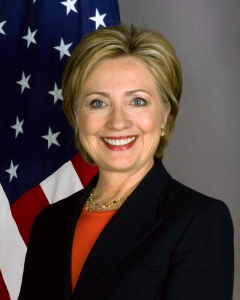 The 19th Amendment of the U.S. Constitution passed in the Senate on June 4, 1919, this was 97 years ago.  The amendment reads “The right of citizens of the United States to vote shall not be denied or abridged by the United States or by any State on account of sex.  Congress shall have power to enforce this article by appropriate legislation.”  Specifically, this amendment allowed women the right to vote.  This June history occurred, when Hillary Clinton became the first woman named as the presumptive Presidential nominee for a major political party.

Previously the closest a woman has come to being anywhere near the Presidency was when Congresswoman Nancy Pelosi was Speaker of the U.S. House of Representatives.  The invisible glass ceiling referring to women seeking to move up in business, government, or other leadership roles has been shattered.  I am happy, truly and honestly happy about a woman being a major party’s nominee but I wonder if the ceiling is self-healing?  Will the pieces come together again like in a sci-fi movie?  Or will there remain a clear opening for other women to rise through?

For females young and older around the U.S. I do believe that Clinton is a beacon of hope.  She has shown that even when mud and something else is slung her way she can take it.  This was shown back in October 2015 during an 11-hour hearing on Benghazi, like a true leader Hillary responded to the pounding of questions from the House Committee lead by Congressman Trey Gowdy (R-SC).  Most recently Clinton showed Presidential poise when she gave her speech on foreign policy.  In response to her speech and the comments around the instability of Donald Trump the presumptive republican nominee, Trump came back with random comments none of which related to his foreign policy plan.

Under constant investigation from when she was First Lady of the United States, U.S. Senator, and most recently Secretary of State, her record has and continues to be picked apart.  Just as President Obama faces obvious racism as the first African American President, Clinton will continue to face scrutiny if elected as the first woman President.  Sadly, the U.S. has issue with what is different and out of the norm and the norm are white males in leadership.  I would like to note that while giving her speech the night of major wins on June 7th she complemented her opponent Bernie Sanders.  Upon her comments there was respectful clapping of her supporters.  Yet when he complemented Clinton during his speech there were boos from the crowd.  Sanders did not even blink nor did he admonish the negative response.

Finally, I want there to be a day when we don’t have to focus on the fact a woman is in a position of power.  Whether it is the CEO of a major corporation or the nominee of a major political party.  The U.S. is merely catching up with other countries who have had female leaders for decades now.  Great Britain, Germany, Norway, India as well as many more nations have and have had female leaders in the highest offices or within the monarchy.  Now that this history has been made let’s move forward to the issues.

Disclaimer: The advertisements shown below on this page are not endorsed by PaisleyPerspecitive LLC or PaisleyPerspective.com, they are independently selected by WordPress.com. Please make comments or contact us at info@paisleyperspective.com if you notice any offensive ads or videos.