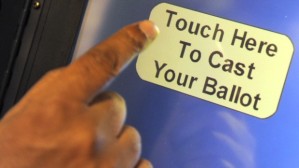 I am the product of generations of activists.  African American along with Native American ancestors who consistently fought for their civic, civil, and human rights.  It is in my blood to be active and present in my own existence.  I first became aware of the political process in the third grade, while attending William H. Brown Elementary School in Chicago.  A huge red voting machine was brought to my school.  Levers and buttons were used to vote for the candidates of your choice.  The machine was intimidating but it helped me to understand that my civic duty of voting might not be easy.

My next experience with politics occurred the summer I turned 10 years old.  I learned about a candidate for President of the United States that hailed from the state of Georgia.  James (Jimmy) Carter seemed to just be a peanut farmer but digging deeper he was a man with clear political goals.  A former State Senator and Governor the political arena was very familiar to him.  I did not know much of about Jimmy Carter when I was a child but his daughter was my age and my parents liked him.  So I decided that he was the candidate, I wanted to win.

I was a freshman in college during the historic 1984 Presidential Election.  Where on the Democratic ticket the first female Vice Presidential candidate Geraldine Ferraro was alongside Walter Mondale.  Sadly they lost terribly to Ronald Regan and George H.W. Bush but I was still proud to have cast my first vote.  I knew at that point that I would always vote for the persons I thought best to hold the office.

As I stated earlier voting is not easy.  It takes effort not merely at the polling place but before you enter the building to vote.  Some things that are a must prior to reaching Election Day is to ensure that you are registered to vote.  In some states there are voter identification laws that require approved identification to be presented upon voting.  In many states this Saturday, October 4th will be the last day to register before the Tuesday, November 4th elections.

Many people do not think their vote matters but it does.  It not only matters, it is your civic duty.  Elected officials write legislation and regulations that impact you every day.  From teacher salaries to whether Medicaid is accepted in your state to other impacts to your community, the individuals who win elections have your life and future in their hands.  Voting is a right that other nations are fighting to obtain.  Finally if you fall into the category of minority or are a female this right came with a struggle, fight and bloodshed.  Don’t take your right for granted; remember your vote is your voice, don’t remain silent.