My dad always said, “freedom ain’t free, baby girl.”   I would nod and respond, “yes sir.”  I didn’t quite understand what he meant when I was a child.  Now as an adult, I understand better what he was saying.  There are men and women defending the United States and it’s territories on battlefields and in other forms.  We are now in an era when cybersecurity is needed as well as protection of our physical land. 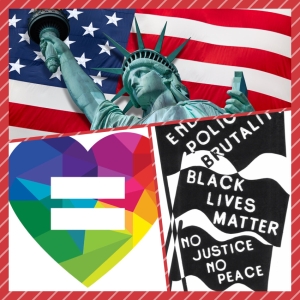 The U.S. is a country with a very diverse and dark past.  This nation was built on the labor of enslaved Africans as well as other people of color.  It is a place where during World War II Japanese internment camps were created.  In addition, during the WWII the U.S. didn’t grant a large number of German Jews admittance to its shores.  One of the greatest tarnishes on the nation’s military past is the negative treatment of Vietnam Veterans upon their return after that war.

There is so much more growing that this nation who won its independence in 1776 has to do.  Aggressive behavior towards young black people both male and female by law enforcement needs to be addressed.  Holding onto remnants of a hateful past that divided the nation and calling it Southern heritage also needs a reality check.  The first part of fixing a problem is admitting that there is a problem; the flying of the Confederate battle flag in South Carolina on State House grounds is a problem.

Recent ruling by the U.S. Supreme Court regarding marriage equality has some Southern states still in denial.  When in actuality marriage is and has been a legal contract for centuries not merely a religious ceremony.  Civil union is what most same sex couples are seeking not marriage in the Biblical sense; couples like friends of mine who have been together longer than my almost 23 years of marriage deserve this right.  They seek the same legal protection of the law that I and my husband are afforded.  Also the ability to truly demonstrate their commitment to their partner.  This is a freedom hard fought to attain and still is not being respected.

My daddy was correct, freedom ain’t free.  Freedom to be a young black male may result in the cost of your life because you fit a police officers or vigilante’s distorted profile.  Freedom to be a young black female may have the cost of having a knee in your back from an out of control police officer.  Freedom of worshiping and welcoming in a stranger did cost nine Christians their life because of his distorted idea of freedom.

On this the 239th year celebrating the Independence of the United States of America, let us remember those who still had to fight for their independence.  Women fought for voting rights during the suffrage movement.  Native Americans who fought and are still fighting for the right to their land not merely being regulated to reservations. Same gender couples fighting for the right in all states to have ability to show commitment through civil unions.  African Americans still fighting each day for the right for 100% respect and removal of symbols of hate flying in their face.  Also let us always whether we agree with the why, respect the men and women who risk their lives for the freedom of our nation.

Finally, on this day when we celebrate at lakes, festivals, and cookouts remember that we as citizens must take ownership of our freedom.  Civics has been removed from the classroom but the responsibility has not been removed from us.  Voting is only part of the process of the price we pay for our freedom.  Staying present and involved; letting local elected officials know that you are present in-between elections is one cost we pay for freedom.  Speaking to a child’s teachers is another cost paid for freedom.  Paying attention to the everyday occurrences around us and giving our voice helps to pay the price for our freedom.  Don’t be silent stand up and be sure we pay the cost needed for continued freedoms…don’t take freedom for granted.