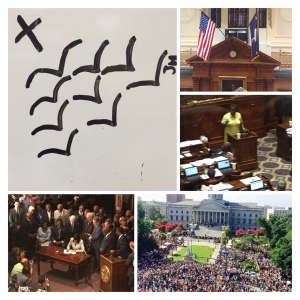 This week the theme song from Schoolhouse Rock animated special “I’m Just A Bill” which explained the legislative process has been on continuous loop in my head.  On Monday, July 6th debate on a controversial and historic South Carolina Senate Bill began.  Bill S. 897 introduced by Senator Vincent Sheheen was for removal of the Confederate battle flag from the SC State House grounds.  Senator Sheheen while campaigning for Governor in 2014 brought up the subject of removing the flag.  Now months into a new year, it seemed that the idea had passed.

On Wednesday, June 17th the horrific massacre of nine members of Mother Emmanuel AME Church in Charleston, SC helped to bring the Confederate battle flag debate to the forefront of South Carolina and the nations conscious.  There were strong connections shown with regard to the Confederate battle flag and white supremacy propaganda by Dylann Roof the 21-year-old charged with the nine murders.  It is believed that the act of true Christian behavior by the families of Rev. Senator Clementa Pinckney and eight of his parishioners: Sharonda Coleman-Singleton; Cynthia Hurd; Susie Jackson; Tywanza Sanders; Myra Thompson; Ethel Lance; DePayne Middleton-Doctor; and Daniel Simmons helped to make it necessary that the divisive symbol be removed from SC State House grounds.  Hearing the families forgive Roof and pray for his soul moved the world.

During a press conference on Monday, June 22, 2015 SC Governor Nikki Haley stated, “It’s time to move the flag from the Capitol grounds.” Haley a Republican had stated just weeks prior that she saw no need for removal of the flag. However, upon massacre of a former Senate college and eight others the need had become apparent.  On June 23rd Senator Vincent Sheheen drafted Senate Bill 897 for permanent removal of the Confederate battle flag.  The flag had flown on the SC State House dome and grounds since 1962, initially flying in memory of the Civil War.  Many have contended that the flag flew in defiance to the Civil Rights movement.  Those against removal of the flag toted that it represented Southern Heritage, which I point out included an economy with a labor force of enslaved Africans and their descendants.

Debate of the S. 897 began on Monday, July 6th in the Senate Chambers.  Realizing the significance of this Bill, I decided to visit the SC Senate Gallery to witness the beginning debates.  Three Republican Senators Bright, Peeler, and Verdin all from the Upstate known for it’s Republican stronghold voted against the Bill during the 2nd vote.  However, there were 37 votes for the Bill and that was a strong indication that it would pass.  As was expected on Tuesday, July 7th after very little additional debate the 3rd vote passed 36 to 3, well over the necessary 2/3 vote.  The Bill then went to the SC House for debate.

On Wednesday, July 8th the Senate Bill reached the house and immediately had 12 amendments made to it by Representative Quinn who like his three Update Senate counterparts was a conservative Republican.  Over the course of the day there were 60 total amendments made to the Bill.  Feeling that Wednesday would be a historic day, I headed to the SC State House for the second time that week after work.  I sat in utter amazement at the stubborn ignorance of some Representatives with regard to the need to pass the Bill without amendments.  There was push and pull as House members for and against the Bill spoke.  I was witness to the passionate cry for passing the Bill made by Rep. Jenny Horne from Charleston, SC, where she represented the families of the Charleston 9.  But more importantly Rep. Horne is a direct descendent of Jefferson Davis, President of the Confederate States of America.

A recess was given around 7:45pm and realizing that I was seeing history in the making, I decided to find a quick dinner and return for the continuation of the debate at 8:30pm.  There was more pushing and pulling as well as side discussions.  The Speaker of the House seemed to have to constantly bang the gavel to get order of the House Chambers.  We sitting in the House Gallery wondered if the Bill would ever pass.  Eventually most of the amendments were tabled and there was a stronghold on amendment 56, which provided detail for placement of the Confederate battle flag upon its removal.

Late in the evening, Rep. Ott proposed a resolution that had the same wording and purpose of amendment 56.  It seemed like a simple solution that would allow S. 897 to be passed as a clean Bill, which was the request of the Senate.  Near midnight Rep. Quinn recalled all the amendments that he had made to S. 897 and a call for a vote was made.  The second vote earned 2/3 of yes votes, which meant there was hope that the Bill would ultimately pass.  The third reading was made and the Bill passed without amendments.

Again the song “I’m Just A Bill” looped through my mind.  It was very much like the legislative process as taught by Schoolhouse Rock.  Only the animated Bill started with an idea and a member from US House of Representatives created a Bill for debate; and upon passing in the House it went to the US Senate.  It was a joyful day to know that the next step was for the Bill to be ratified by the SC Speaker of the House and then signed by Governor Haley.

It was announced that Governor Haley would sign the Senate Bill 897 at 4:00pm on Thursday, July 9th and the flag was scheduled for removal on Friday, July 10th.  While sitting at work I thought it would be enough to see the signing via streaming video or the news.  However, I had witnessed debates by the SC General Assembly and realized I needed to be present for this historic moment.  Driving like a mad woman and using my familiarity with the area around the SC State House I found a parking spot and rushed through the blazing heat to the third floor that overlooked the lobby area set up for the signing.

There was media, citizens, and legislatures packed in to witness the moment as well.  Also present were family members of the Charleston 9 victims including the widow of the Rev. Senator Clementa Pinckney.  In addition, were three former SC Governors including two who had previously tried to discuss removal of the Confederate battle flag.  Specially Governor David Beasley lost his re-election do impart to this debate. Watching the signing of the Bill was emotional because it did show that bi-partisan leadership and agreement can occur.

On Friday, July 10, 2015 thousands of citizens were present to witness the removal of the Confederate battle flag from SC State House grounds.  People poured into the street and around the grounds for a look at history.  There were those in support of the removal as well as those not supporting the removal.  I for one was happy to see the flag removed.  As I have stated I saw its presence as being divisive and conjuring a past of hate.  Just as the reality that the Nazi flag is negative to those of Jewish decent so is the Confederate battle flag to me.  Unable to attend in person, I watched on television with tears flowing from my eyes.  I felt my ancestors rejoicing.  I know that removal of the flag will not make racism and hate disappear.  However, it possibly will help bring discussion and progress toward better race relations.

Finally, some immediate changes that occurred was NCAA is now considering South Carolina for future conferences and tournaments.  The NAACP also has raised its boycott of the state.  During debates of removal of the flag in the Senate and House major corporations submitted letters in support of its removal.  It seemed that people looking in could see that it was long past time for the symbol of an oppressive past to be taken down and put in a museum.  I do believe we must remember history including the ugliness of some of the past…hence we forget.  However, I don’t need to see history blowing in the wind to remember it.