My mother’s number one rule was always treat people with respect.  Her advice is reflective of the golden rule that can be found in many cultures and religions.  Treating others as you wish to be treated is something said by mothers in all parts of the planet.  China, India, Africa, England, Canada, Mexico, the United States, and in other nations children are taught this simple but powerful message. 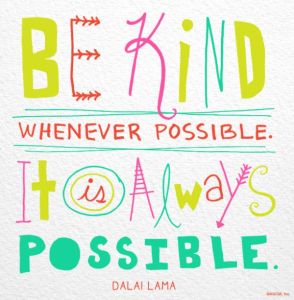 Specifically, my mother would say that individuals in the service industry can be your greatest allies.  Food service, custodial, and administrative workers were whom my mother referred to often as people who can help you.  I learned the truth in her lessons during my undergraduate college years.  While attending college many times when money was tight a food service employee named Teresa ensured I did not go hungry.  Custodial staff allowed friends and I to study while they cleaned up as long as we didn’t “mess up”.  I now better understand that the “messing up” they referred to was not always literal.  What it meant was for me and my fellow African American classmates to study hard and earn our degrees.  My numerous trips to the financial aide office and other university offices also showed how patience and respect for clerks helped me get assistance quickly…often before those who’d been waiting for hours.

My mother died five years ago but all the lessons she taught me over the years have served me well.  Recently there have been legislation put in place in North Carolina called the transgender bathroom bill.  The law states that the gender on your birth certificate should correlate with the bathroom you use.  However, transgender individuals who have not yet had full transformation can be put in an awkward and possibly dangerous situation.  The idea is supposedly to reduce the chance of lewd behavior or sexual assault specifically against women.

The same insensitive bill was presented in South Carolina, where I reside.  Within a week LGBTQ activist came together to organize a protest.  They attended legislative hearings and gave testimony on why the bill is a bad idea.  One of these people is a poet and friend.  I shared her post on Facebook and stated the following:

“This is my friend she is transgender.  She’s a poet and I use to be afraid to speak to her.  She may not know it but I was.  It wasn’t because of anything she did but my own isms and what I thought others would say.  I admit I still am wrapping my head around the idea of someone being physically born one gender and seeking to change it.  However, I do empathize with those of the transgender community.  They like others of the LGBTQ community have no physical interest in those outside of their community.  They aren’t trying to get you, your man, or your woman for that matter.  I’m still learning but one thing I believe is the bathroom bill is a bad idea.  The SC General Assembly needs to focus on infrastructure for the remainder of this session.  This is what matters most to me.”

When I wrote the message, I felt a little nervous.  But then I remembered my mother saying to always be kind.  I heard my father say speak your truth and don’t be afraid to say what is right.  The idea behind any bathroom bill is reminiscent of the Jim Crow laws in the early and mid 20th century.  The reality is that many individual/single bathrooms are used by both genders.  Without being able to indicate exactly how many instances have occurred where a person not of the gender or even transgender have attempted to use a restroom opposite their gender is not quantitative.  Sadly, criminals and those meaning others harm will get around any bathroom law.

I have always chosen to work toward the betterment of society through activism for art, political, and women’s issues as well as human rights issues.  It is disappointing to know that there are elected officials seeking to hold back any gender or race.  Here in South Carolina crumbling roads, education, and jobs are what I believe to be most important.  I strive each day to be my mom’s legacy and to be kind to everyone.  I think my mom would agree.

This video illustrates that the message of kindness transcends language barriers.  Grab your tissue and give it a watch.  Kindness begets…kindness.

Disclaimer: The advertisements shown below on this page are not endorsed by PaisleyPerspecitive LLC or PaisleyPerspective.com, they are independently selected by WordPress.com. Please make comments or contact us at info@paisleyperspective.com if you notice any offensive ads or videos.